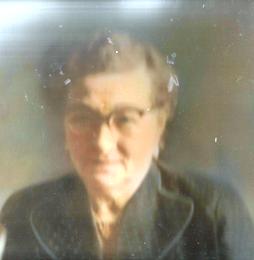 (sorry for the photo quality, it's the only one I have and it's under a beveled frame)

I’m of French-Canadian heritage. Well, half. Growing up, we were very close to my dad’s parents. My mom gave daily shots to my grandfather (she had done it for her mother with her diabetes). I remember up to age 5 sitting on their floor playing with green army men (think Toy Story) with my older sisters. I remember the smell of pipe tobacco and how terribly old my grandparents were.

When my grandfather died, my dad made an apartment in the attic for my grandmother — Mémé .

During the 13 years she lived with us, she was my best friend. My first thing to do when I came home was to go see her. If I had things to talk about, I didn’t talk to my mom, I talked to Mémé . Saturday nights we played Canasta or Reno Keno (kind of a card  Bingo game). Saturday nights were also French night. We were only allowed to talk French…needless to say I listened a lot! ;D

Mémé was a wonderful woman. A woman of faith (although it wasn’t  until shortly before her death that she came to a saving faith). A woman of persuasion. She traveled to visit her many (13) children and I’ll never forget the time the Greyhound bus came down our VERY NARROW street to drop her at her door! She had talked the driver into taking her all the way home.

She kept her money under the mattress (what little there was), buried 2  husbands and numerous children. She called my grandfather Pete  even though his name was Aurelius (maybe that was why!)  She used to spell out her cuss words, even though she couldn’t write and lapsed into French when agitated. She cheated at cards (very obviously – as a joke) and had a love for life and for people. Once she heard a man from Paris speak and she teared up at how beautiful it was compared to her Canuk version.

I miss my grandmother. She was a wonderful woman, a loving woman, a tender-hearted woman, a woman of great strength and endurance. I love that I was raised in a multi-generational home and really ache for my own children who have  only known their grandparents from a thousand miles away and only have 1 left.

Mémé, this is for you…I love you and I am deeply grateful for all you taught me about being a strong woman.

← Prev My husband just doesn't lead! Is it cleaned like Grandma would do it? link-up →