How I Met Your Father – Episode 3

And, of course, the piano player was a young barely 20 year old named Kevin Megill.

Dianne and I had many discussions with the pastors/elders (there were 2 of them) about their church but we were very confused about how the single folk functioned. The church sort of encouraged non-dating. Of course, for us New England gals, this was a whole new idea and we thought it kind of weird! (many of you reading this may feel the same way ;)) We didn’t want to come in to the church and try to bring division so we asked if they had any problems with us having social times with the guys and gals who were single and we were given the green light.

So we set up fellowship times, dinners (pot lucks with everyone and smaller ones with just a few folks), impromptu worship times, bowling, etc. We encouraged guys (and girls) to come to our house for just hanging out. Everyone began to feel more comfortable just being friends with one another.

During all this time I watched Kevin. When I first saw him I thought he was really cute! But I was 25 and he was just barely 20. Still, our church tended to do everything together. Our Sunday morning worship services lasted several hours. In the first half all the men were encouraged to come prepared to share something from the scriptures. In the evening every one was encouraged to share what God was showing them from the Word or in their lives; then we all ate together (this worked out well for the college students who had no Sunday evening meal in the dorms). We had weekly nights of evangelism where we’d go onto the college campus with a partner, ready to share our faith with anyone interested in talking.

In the coming year I got to see Kevin in just about every aspect of life. I saw him with his roommate. I saw him with the guys in his dorm he was mentoring. I saw how he treated the single gals in the church with respect and protection and how he treated the married women with deference and honor. I saw the humility he showed toward the older men and the fun and playfulness toward the children. I saw how he reacted when things didn’t go well (and there were MANY times that things didn’t go well). I saw his absolute passion for the Word of God and the time he shared (in tears) his walking for hours in the middle of the night seeking the Lord’s revelation to Him in an area. It was at this point this thought came into my mind:

I could give my life to his man. 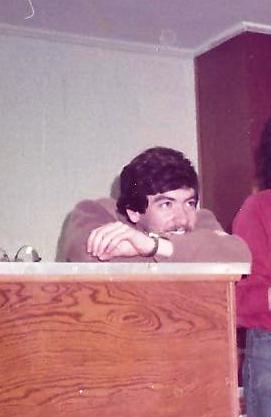 But here we were. I was now 26 and he was just 21. His goal was to be a BACHELOR ‘TIL the RAPTURE! 😀 He really wanted to not get married because he wanted his life to be so focused on serving the Lord and he saw marriage as a distraction (that’s what Paul called it!) So, whenever he had a crush on a girl, he’d “pray it away”. (I found all this out later) And I had been content walking where God had me to walk, knowing that although I wanted to be married, I was trusting in His timing for my life and His fulfillment of desires.

And slowly, from opposite sides of the church, we were falling in love. I talked to one pastor, he talked to another. My pastor encouraged me to do nothing to try and manipulate things (because I wanted God to be the One to light the fire under Kevin and not his head to be turned by me flirting with him). Kevin’s pastor said, “I don’t think she’s interested in getting married” THAT’S NOT WHAT I HAD SAID!!! “And, um…, I think she’d rather marry someone closer to her own age.”

I did know this: I didn’t want to get married AT ALL if I couldn’t be more effective for the Kingdom of God with my husband than I was as a single gal. I was free to get up and go to a friend in the middle of the night if they needed me. I was free to give all my money to someone who needed it. I was free to minister however I felt called by God. I was free. Would marriage – to anyone – cause me to lose the opportunity to minister and answer His call in ways simply because I had to think of someone else? Would that be a bad thing?

As I was falling deeper and deeper in love, these were the questions I was asking myself.

One other thing you need to know. Through all of this, I was working in an insurance office. I shared all of this with the gals I worked with. Most of them were NOT Christians. They were absolutely FASCINATED with my life, with my choices, with my values, with my faith. They were actually watching much more closely than I’d ever realized.

And then The Summer of ’84 changed my life forever.