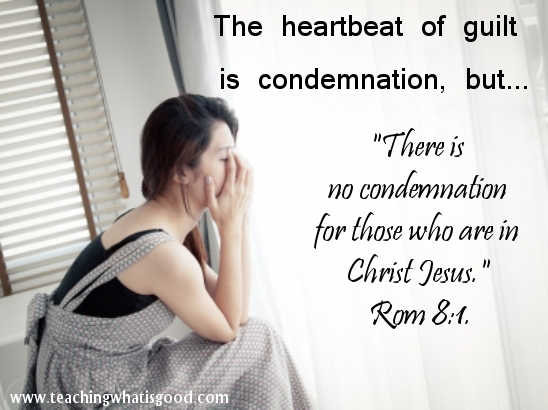 Are we guilty of guilting others?

You’ve experienced it. You’ve quite probably used it at some point in your life, too. In the Christian world we don’t like to call what we do to others piling on guilt, but that is what we do. We much prefer to put it in a better spiritual light and say, “You reap what you sow” but it can turn into an *I Told You So* attitude very quickly and with little provocation. Why do we put guilt on others?

But no matter how it is used, guilt is the biggest UNmotivator and the most deadly joy-killer that has ever been used on the human race. I’ve spent the better part of 5 decades battling this tool of the enemy and have developed a keen eye for guilt in the tiniest corners where it crawls.

The heartbeat of guilt is condemnation.

We all know the verse,

“There is no condemnation for those who are in Christ Jesus.” Rom 8:1.

Yet still we try to motivate others through guilt. We think if they TRULY know how disappointed God is in their lives, they’ll pull themselves up by their bootstraps and do better. But we seldom stop to think that guilt does not produce faith, it produces flesh.

Guilt does one of two things:

So what was originally intended to be something to pull us closer, actually becomes the means to push us further from Him and His love and forgiveness.

I’m never quite sure why, but we tend to be afraid of grace as the true motivator. I think perhaps we misunderstand the real nature and power of grace. We erroneously think that if we give grace or share God’s grace to others that we are giving them liberty to sin. But grace is more powerful and effective than we ever realize! When we really understand grace, we know that it lifts us above ourselves and places us in the realm of God and His power. It floods our hearts with humility and gratitude and it encourages us to fall more deeply in love with our precious Lord. This grace, not guilt, is the motivator for us to walk away from sin.

Which would YOU prefer?

All Scripture quotations are taken from the NASB.
Unless otherwise indicated, photos from pixaby.com
image courtesy of FrameAngel/freedigitalphotos.net