How to defeat a culture of judging in the church? 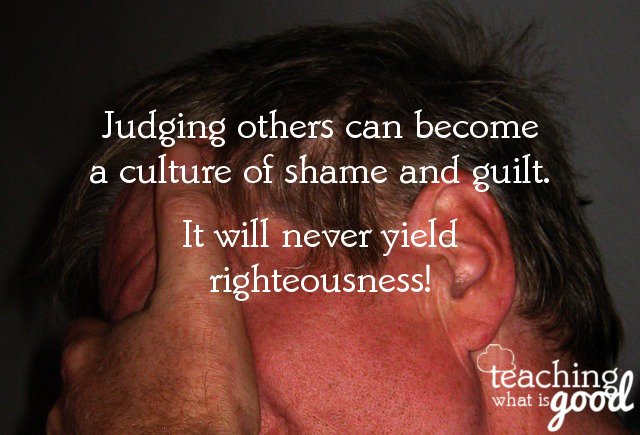 To judge or not to judge that is the question!

Do you ever feel like you don’t fit in in the church, like others are judging you? Like everyone is looking at you and thinking you are doing all kinds of things wrong? Do you feel judged because you have different views than Christians around you?

I’m sure we’ve all felt it at some point in our lives. Whether real or perceived. That feeling that we are deemed inferior or that others view us with contempt. It might be because of our views on clothing styles or educational choices or music or movies or (gasp) politics.

Wait? How can both sides lead to bondage?

The Lord alone is our Judge.

There is only one Lawgiver and Judge, the One who is able to save and to destroy;
but who are you who judge your neighbor? James 4:12

God is the only One who has the authority to judge.

The Word of God is the authority for our lives; not me and not my neighbor. But we do so love to hold that place of authority, don’t we? We like to believe that our views, our standards, our perspectives are as authoritative as the Word of God. And we judge others accordingly. When we do this, however, we are usurping God’s role and placing ourselves above Him concerning a brother’s faith walk.

The enemy distorts all that God has devised.

He was a murderer from the beginning, and does not stand in the truth because there is no truth in him. Whenever he speaks a lie, he speaks from his own nature, for he is a liar and the father of lies. John 8:44b

What are some of the many responses that come to our minds?

In each of these responses, there is an element of truth. That’s the enemy’s greatest tool because he twists and distorts God’s Word. And, when we are undiscerning, we fall hook, line and sinker.

The biggest thing God has done in my life these past 40+ years is to step-by-step rip out my judging and critical spirit. Yes, I ABSOLUTELY want to see my brothers and sisters in Christ released from slavery to be set free into victory. But this will never happen by my trying to guilt or shame them into it.

Unity is the opposite of judging.

Behold, how good and how pleasant it is
For brothers to dwell together in unity! Ps 133:1

Judging (or being judged) brings division among the brethren. It separates us into camps: mine and wrong. When we judge others we mark a chasm of truth. Sometimes those truths are merely our own “logical” conclusion based on a real biblical truth.

If A equals B, and B sometimes follows with C, then followed through to its “logical” conclusion, A always equals C, therefore C is always wrong.

Man’s (often flawed) logic is not the same as scriptural truth.

And often God convicts us personally on a certain thing. Perhaps it has become an idol in our own hearts and His love and mercy won’t allow us to keep it there. He, therefore, calls us to relinquish it. If we obey with joy at following Him and the transformation that comes into our hearts, we are doing great! The problem comes when we jump the shark (so to speak) and begin to lay the burden of that requirement onto others when God has said nothing of it in His Word. If they don’t follow our instruction, we judge them as worldly or unteachable and in sin.

In doing this, we’ve widened the divide between us and unity grows further and further away. And the enemy is laughing at his victorious ruse!

There is 1 weapon to defeating judging in the church.

Nope, it’s not the armor of God. Neither is it the sword of the Spirit. It is a weapon that has never looked like one. It is the same weapon that defeated sin and death. It is the foundation and goal of our faith.

To some it sounds kind of wimpy. How can love succeed where guilt and shame fail? Once again, asking this question means we have lost sight of the beauty and simplicity of the gospel and the heart of God.

Love is more powerful than guilt, a greater motivator than shame and more victorious than anger, arrogance and finger pointing. It is the greatest thing! This one little thing is the goal (meaning the intended final outcome) of all of the instruction found in the scriptures.

Are you loving those you disagree with? I mean really loving them, not just saying that, of course you do. Are you willing to lay down your life for them? Do you search the heart of God to find out what the most loving thing to say or do is? And very often it is NOT what you are thinking it is!

When I’m loving others as Jesus does, I have no space for judging. I’m too filled up with wanting their best, regardless of what it means to me. I have no room for being right, because my heart is overflowing with seeking their growth and maturity. Love will kick judging to the curb because it is more powerful, more divine, more Spirit-led, more centered in the very heart of God. After all, He IS love!

Pray for God to fill you with His divine and supernatural love. THAT is the most powerful weapon the church has. A judging spirit doesn’t stand a chance against it! Nor does anything on either side of eternity!