How often do we catch ourselves saying this to our children? In my Tips for Moms series, I’m going to give a simple tip we’ve used for the past 28 years with our own children. 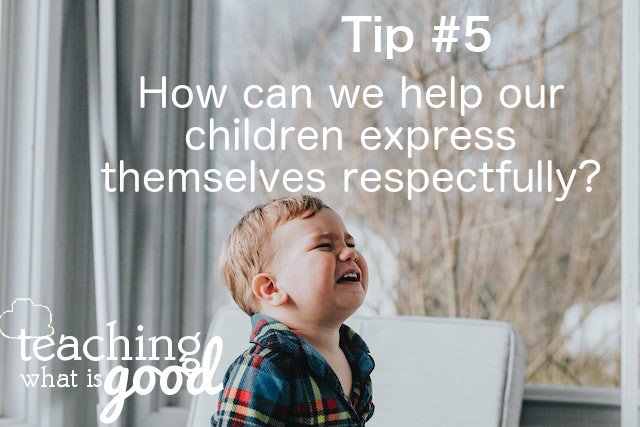 Do comments like these get under your skin with your children?

I remember when our oldest was little and we began hearing these things from her toddler lips. My husband and I decided that there had to be a better way other than simply saying, “Say that again and you’ll get in trouble.” We began to think of how God responds to us. He tells us in the NT to “put off” something but then He always links it with “putting on” something else! Then we thought of the parable of Jesus concerning the unclean spirit that is cast out of a man in Matt 12:44

“Then it says, ‘I will return to my house from which I came’; and when it comes, it finds it unoccupied, swept, and put in order.
Then it goes and takes along with it seven other spirits more wicked than itself, and they go in and live there;
and the last state of that man becomes worse than the first.”

We realized that we didn’t want to just reprove bad behavior for our children, we wanted to build GOOD behavior into our children; to fill them with righteous alternatives. And we didn’t like the “children should be seen and not heard” viewpoint. We wanted our children to have a voice, even if it was to voice discontentment. But we wanted them to learn respectful speech.

How can children learn how to say things in a respectful manner? We had to teach them alternatives!

They would begin to escalate in their wants and sound more demanding. But we didn’t want to simply squelch them. So, to give them a voice to mention the fun things they saw, we allowed, “It sure would be fun to have XYZ.” I responded, “Yes, that would be fun, wouldn’t it?” I heard them and validated their interest but it never turned to demandingness or even to discontentedness.

It is a lie, they didn’t hate us. They were simply angry with us. So we allowed our children to say, “that makes me angry” or “I’m angry that you are making me do that.” BUT, being angry did not give them freedom to disobey. We allowed them to express their exasperation but didn’t allow them to disobey. There is a difference. After they obeyed, we would sit down and discuss what made them angry. We acknowledged their difficulty and let them know they were heard. Sometimes we even changed how WE did or said things so that we didn’t push their buttons. It’s all part of learning to communicate better to strengthen family dynamics.

Sometimes it is said and there is no answer.

But sometimes they are really questioning our authority. When our children were asking why as a response to a command, we didn’t want to just say, “You can’t ask why anymore.” Part of our job is to train them in wisdom, and that means explaining our reasoning to them. But that isn’t the same as giving them carte blanch to question our authority. So, we taught them to say, “OK, Momma. May I ask why?” First we expected obedience and then they could inquire. Sometimes we gave a reason, sometimes we didn’t. But we always wanted them to know they could always ask – not demand, but ask.

All Scripture quotations are taken from the NASB.
(image courtesy of arztsamui/freedigitalphotos.net)