3 Things I’m Clueless About as a Mom

I am often asked many questions about parenting. I’ve been a mom for 28 years and I’ve raised 8 children, almost 6 of them to adulthood already. You would think there would be many things I’ve learned. And there are. But there are just some things that have mystified me all along the way! 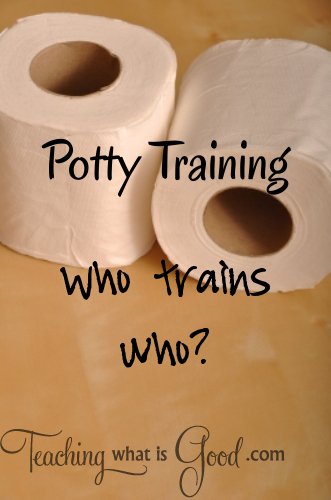 Let me just say up front that all of my children ARE potty trained! But to be frank, it is nothing that I did. I’ve known women who have started potty training their children at 12 months and were still working on it 2 years later! And I’ve known moms who learned when their child normally went and learned to put their babies on the potty chair then. But these children had no concept on how to control themselves when they really had to go. And who has the time to chase a child all over the house to make sure they are not having “planned accidents” in closets or under beds or in corners of every room in the house? I certainly never did.

My motto is: if they can’t be potty trained in a day, they just aren’t ready!

Charts and M&Ms didn’t work for us when I tried them with our oldest. After setting the timer every 15 minutes for 2 days (and being totally discouraged with no success and tons of accidents) I simply gave up. One day I bought some panties with Cinderella on them and told her that when she wanted to wear these and learn to keep Cinderella dry, they were hers to wear. A week later she wanted to give it a try and SUCCESS!!

Basically, if they tried for 4 hours and had more success than accidents, we kept on going. If not, it was back to diapers until THEY were ready. So I have absolutely NO idea how to train a child to use the potty chair.

#2 Eating everything put on their plate 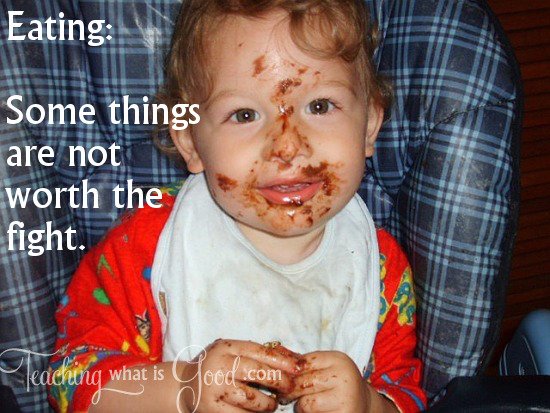 I’ve had friends who are convinced that you can train out picky eaters. And it is possible that that is true. Growing up I had serious issues with textures of certain foods. I remember at age 5 falling asleep at the table because there were foods I just couldn’t eat. My father used to say I was too lazy to chew (well, I AM lazy, but that wasn’t the issue). When I finally was put to bed hungry, I’d cry myself to sleep in between my sisters on the bed. I felt rejected by my parents and like a total failure who couldn’t even eat! As a mom, I remembered the things I saw from the other side and thought:

There are just some battles it is not worth fighting!

For me, with my children, food was one of them. I remember being severely reproved by an older mom telling me I was teaching my children to rebel; that I was being a bad mom for not making my children eat everything, no matter how they felt about it. For 2 days I decided maybe she was right. After all, I wanted to honor the Lord as a mom and to help my children learn obedience and submission. My second child, unfortunately, had texture issues even worse than I did as a child. And he had a much stronger gag reflex. There were certain foods that, just putting them in his mouth, caused him to gag. And this brought up anything else he’d already eaten. Needless to say, those 2 days were horrible to both my child and to me.

So, I repented and went back to my original view. There were so many things in my children’s lives where they’d have to learn obedience. I just didn’t see why food would have to be one of them. They always had to try a new food, but we gave them the choice as to whether or not they could eat it. I never learned to teach my children to clear their plates. And for me, it wasn’t a huge concern. Years later, most of the rest of my children eat a wide variety of foods. But that one child still has issues with certain foods, even as an adult. 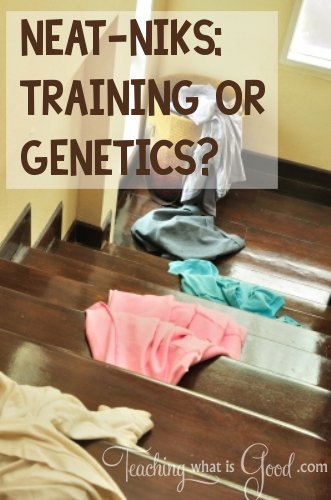 When our children were little I thought I could just train them to become naturally neat. We had our daily chore and cleaning routine. They had charts and stickers, all the usual things moms do to train their children to keep everything in order. They even had their own Treasure Boxes to keep their special (to them) keep sakes. They cleaned well and quickly and learned how to maintain a clean and tidy room. We had daily inspections to help things along.

Now I want to state right off the bat that I am NOT a neat person by nature. I don’t mind mess or clutter (well, there is a breaking point for me on this, but generally speaking untidiness doesn’t distress me). And having 8 children doesn’t really help because clutter and mess times 8 can be pretty huge! But as God was training me in being more orderly and organized, I was training my children.

When they came to their teen years, I gave more privacy and choice in keeping their rooms their own (except for food… that was where I drew the line). What did I find?

Years of training only helped to an extent; soon their natural bent would shine through as tidy or messy.

I wish I could tell you that my children have become neat freaks due to all the years of training and work to teach them tidiness. But they haven’t. They have picked up more of my innate nature and let things fly. I have one or two with stronger neat tendencies, but those are countermanded by their hoarding desires! A family of pack rats makes living tidy and uncluttered very hard.

The training was good; they learned how to clean and how to keep tidy. My job is done. Whether they will carry this on to their own homes is beyond me!

So how about you? What things do you find beyond your understanding as a mom?

Unless otherwise indicated, photos from pixaby.com

(images courtesy of artur84 and varandah/freedigitalphotos.net)